He is known to defy death by sometimes working on his own motorcycle, occasionally without adult supervision. He has built several choppers through the years while he saves money to someday buy a Bill Dodge or Billy Lane custom. And now he is taking his talent and applying it to a Strider Balance Bike for the Flying Piston Benefit Builder Breakfast in Sturgis, 2022. 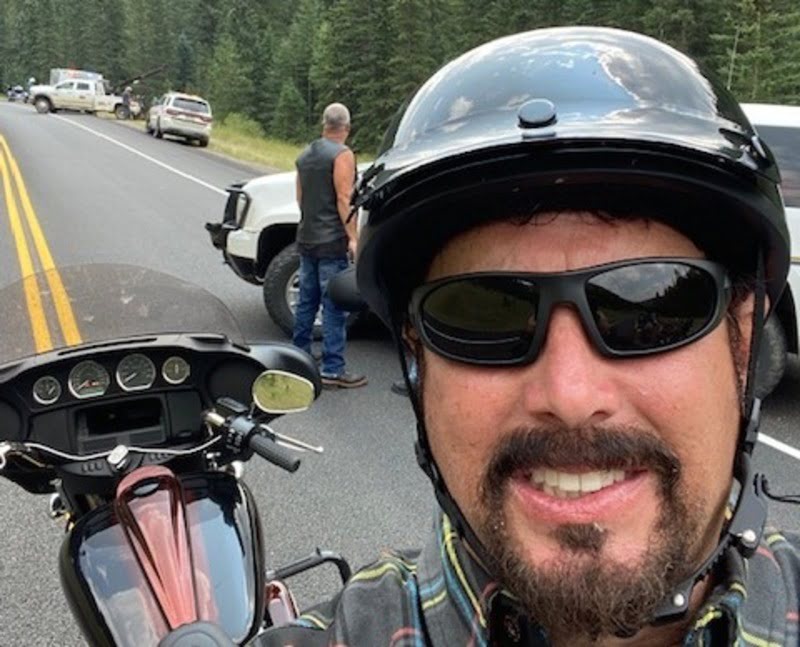 Edge has not entered and not won, literally, thousands of high-profile bike shows including Mama Tried, Michael Lichter’s exhibitions at the Buffalo Chip, and the AMD World Championship (Radical Class). 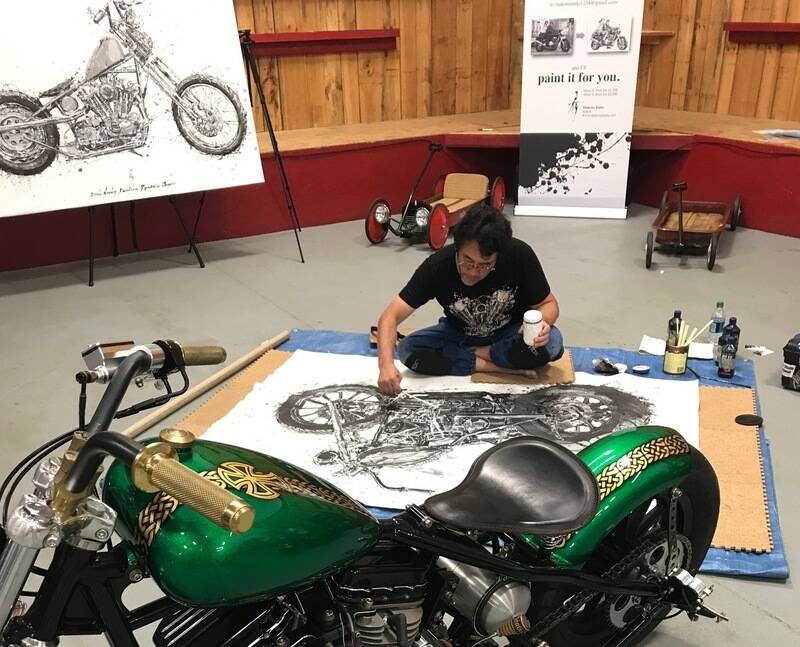 Edge’s bike (painted by Ron Harris) is painted on canvas by Makoto Endo.

Greg “Edge” Scheuer wrote for The HORSE Magazine with some regularity for a long time and continues to write for Bikernet.com very occasionally. His major contribution to the culture is that he built and ran the world-famous, chopper-oriented Smoke Out Motorcycle Rally for 20 years.

He continues to work with Cycle Source Magazine for the upcoming Smoke Out in September 2022 in Salisbury, NC. His credits include working with the Discovery Channel when the first Biker Build-Off was filmed at Smoke Out. Edge has directed several films including the very successful Road 2 Smoke Out documentary with producer Zack Coffman. 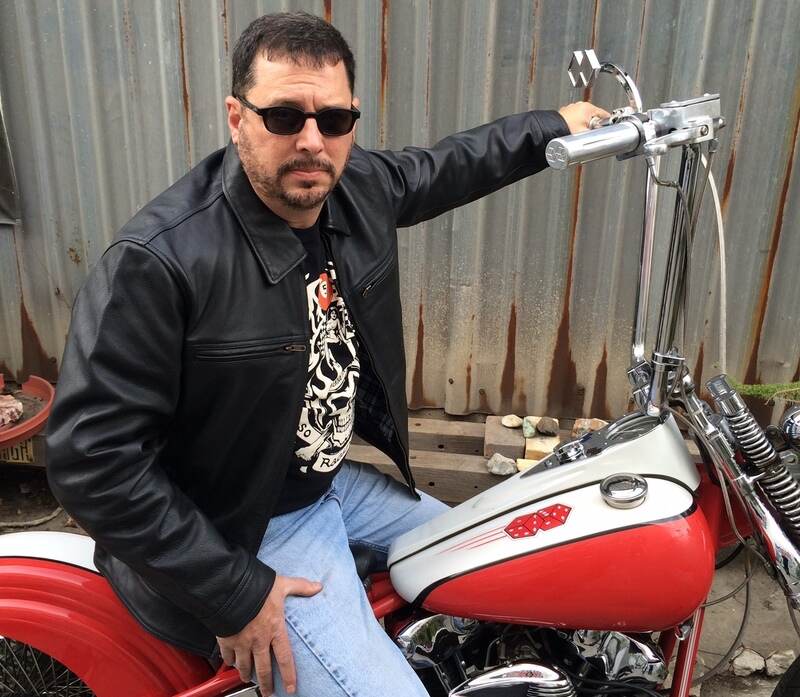 Edge believes in hard work, no hand-outs and the Second Amendment. Meet him at the Flying Piston Benefit breakfast to have your chest autographed. 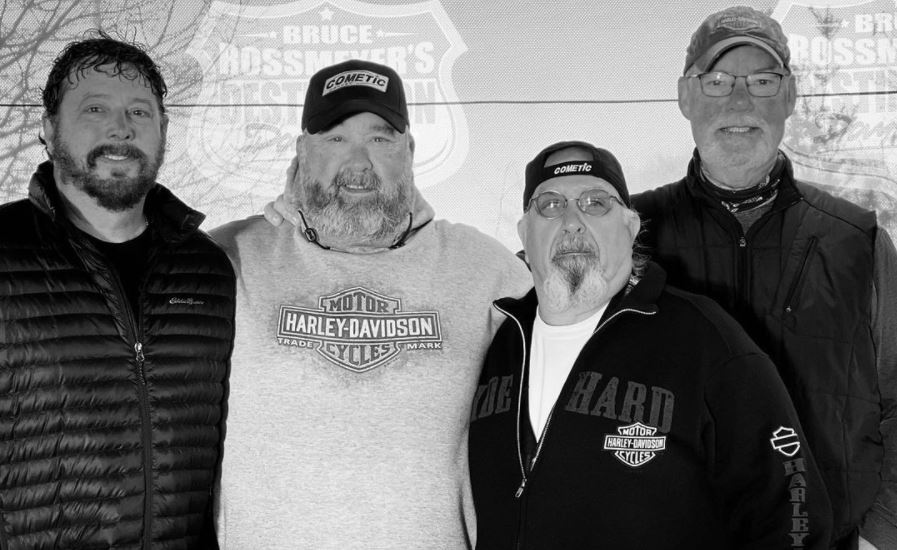 Edge’s Inspiration for the Wild One

Edge created a custom Strider as an homage to the 1953 American film The Wild One and the Black Rebels Motorcycle Club (BRMC), a gang led by Johnny Strabler (Marlon Brando). 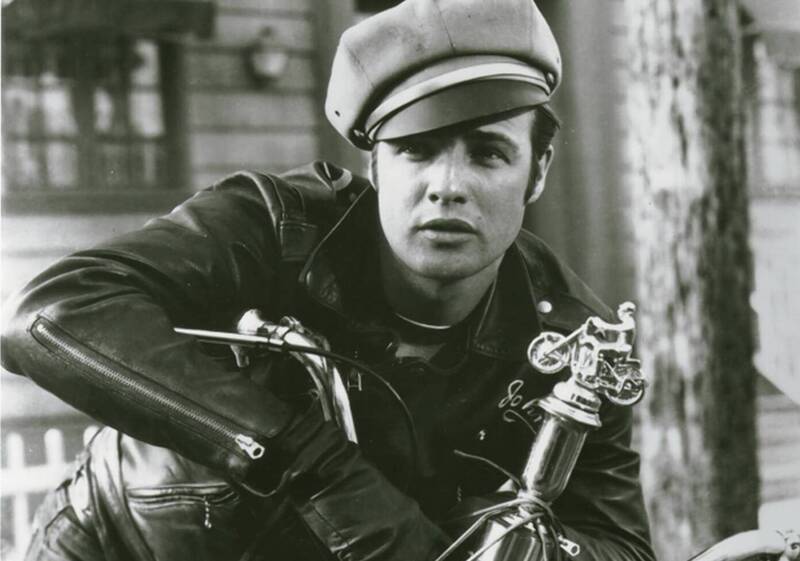 Marlon Brando in the film The Wild One 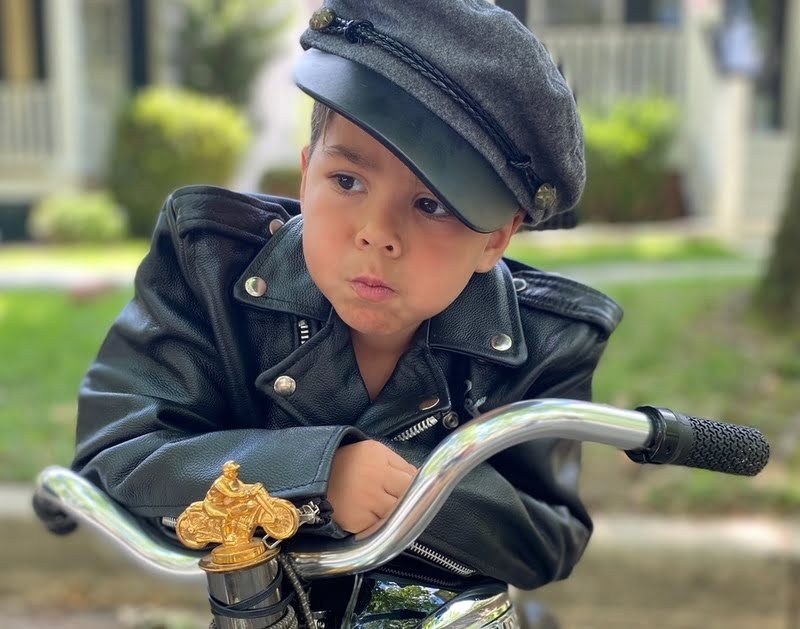 The Perfect Wild One Photograph with Grandson Wilder 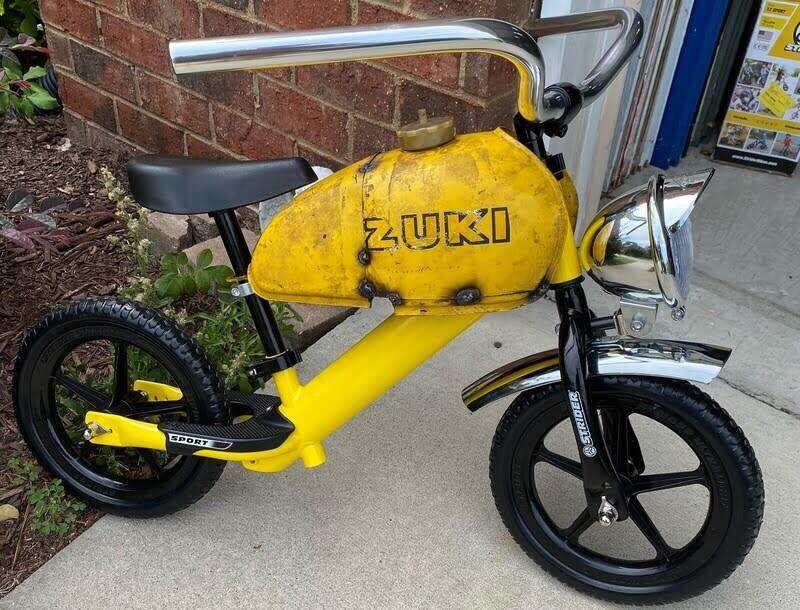 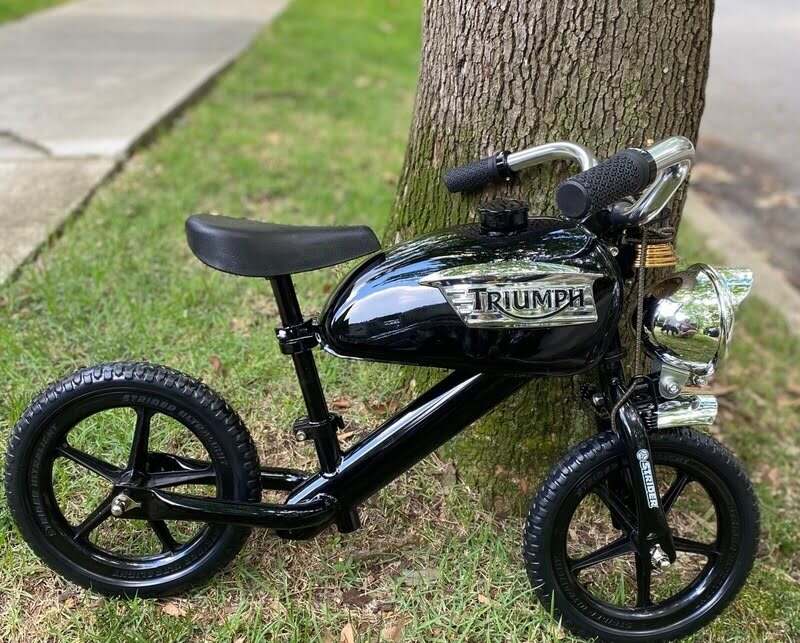 The Wild One is Ready to Ride!

Edge Gets The Perfect Shots

In order to get the perfect shot, Edge went out and got a diminutive hat, jacket, bungee cord, and trophy. He got all the accessories early then was concerned that his grandson’s FIN and WILDER would outgrow the jacket. Not the case. The boys are looking good! 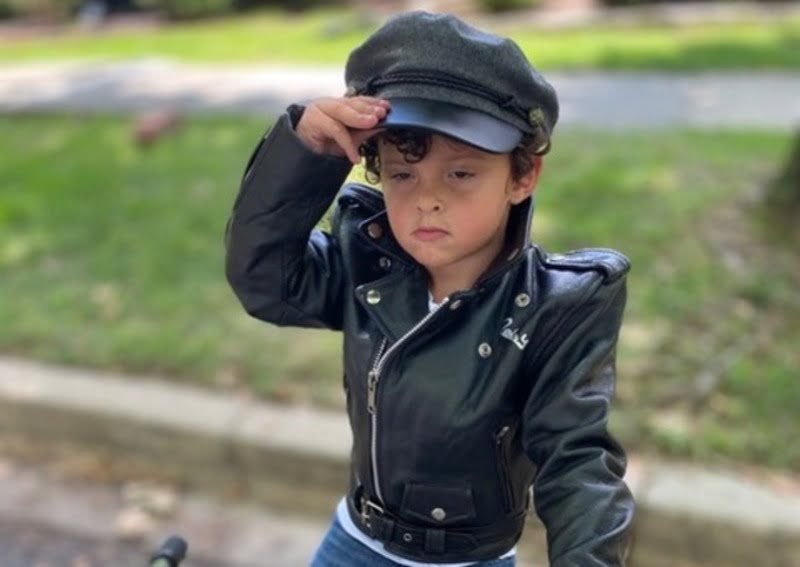 Another Finn-tastic picture of Grandson FInn

About the Wild One The cast of the Wild One.

Johnny (Marlon Brando) and his motorcycle gang roll into Carbonville for a biker competition and raise enough hell to get kicked out of town. They repair to nearby Wrightsville and continue their reign of terror. The local sheriff (Robert Keith) is helpless to stop them, but when a rival gang arrives, he manages to arrest their leader, Chino (Lee Marvin). Meanwhile, Johnny finds himself attracted to the sheriff’s daughter, Kathie (Mary Murphy), and decides to stick around.

The Wild One is a 1953 American crime film directed by László Benedek. It is most noted for the character of Johnny Strabler (Marlon Brando), whose persona became a cultural icon of the 1950s.

The Wild One is considered to be the original outlaw biker film and the first to examine American outlaw motorcycle gang violence.

The film’s screenplay was based on Frank Rooney’s short story “The Cyclists’ Raid“, published in the January 1951 Harper’s Magazine and anthologized in The Best American Short Stories 1952.

Rooney’s story was inspired by sensationalistic media coverage of an American Motorcyclist Association motorcycle rally that got out of hand on the Fourth of July weekend in 1947 in Hollister, California. 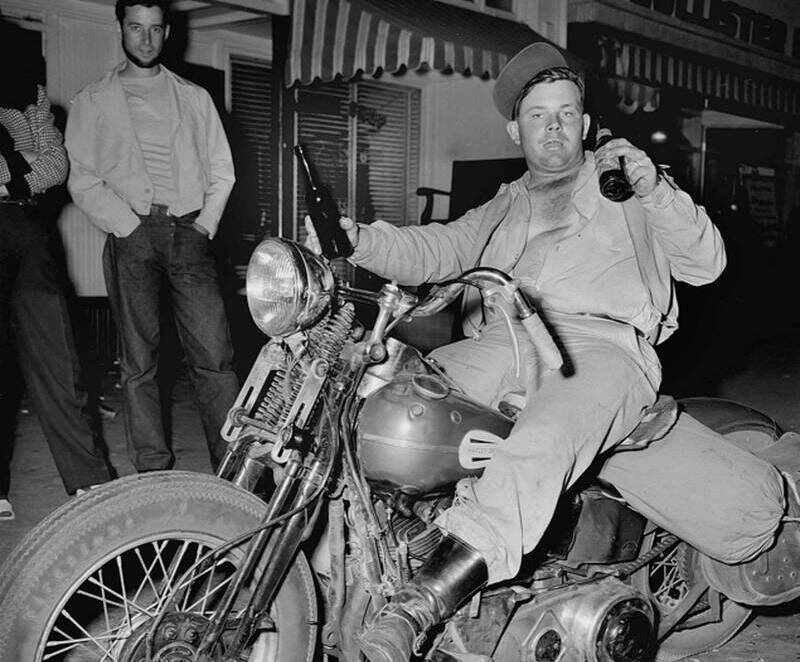 Fourth of July weekend in 1947 in Hollister, California

The overcrowding, drinking, and street stunting was given national attention in the July 21, 1947, issue of Life, with a staged photograph of a wild drunken man on a motorcycle. The events, conflated with the newspaper and magazine reports, Rooney’s short story, and the film The Wild One are part of the legend of the Hollister riot. 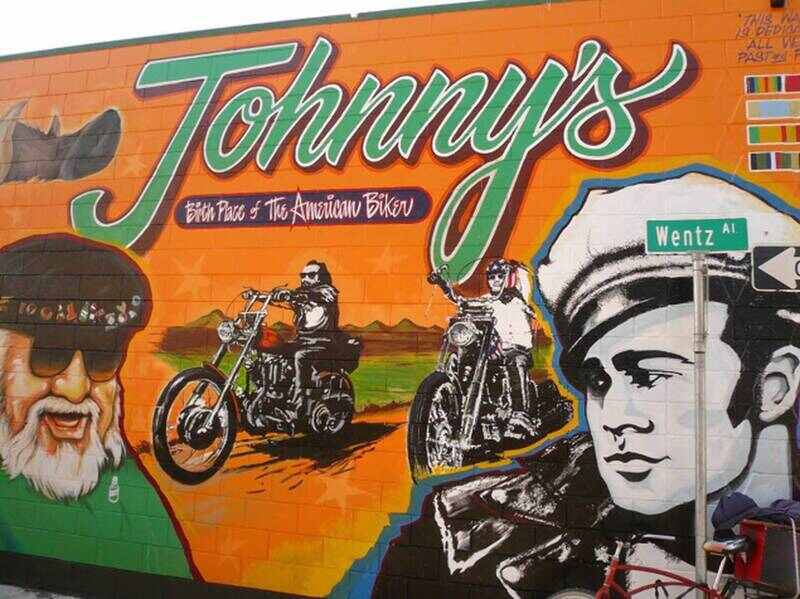 A mural of bikers at Johnny’s Bar & Grill in Hollister.

Leather-clad toughs zoomed through town, performing wheelies on manicured lawns, flinging beer bottles, fighting, and urinating in the streets, driving their bikes right into the bars.

On Sunday night, the California Highway Patrol came to help. By Tuesday morning, the drunken bikers were gone and things went back to normal.

Just a few months later, the town was happy to host another rally.

New for 2022, our headliners include artist Darren McKeag and steel artist Billy Lane.  Get a free hero card and you can even get a picture on their custom choppers.

Check out our Headliners’ Darren  Mckeag and Billy Lane:

About The Flying Piston

The 2022 Sturgis edition of the  Flying Piston Benefit Builders Breakfast is produced by Marilyn Stemp of Iron Trader News and Jeff Najar of Green Forest Brand.  Our work raises awareness and funds for non-profits and individuals in the motorcycle community, vets, and kindergartners.

For more information, please contact marilynstemp(at)gmail.com, 828-205-8482. To get involved with the Piston, click here. Enjoy the rally and we hope the Sturgis Buffalo Chip 2022 Lineup is just what the Doctor ordered. 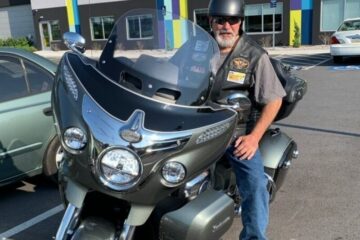 On The Road with
KIRSH’S CHM-1 Helmet Technology

Donny Devito, President and Chief Operating Officer of KIRSH Helmets, is the go-to guy for introducing the latest technology in helmets – the KIRSH’S CHM-1 Helmet Technology. I met up with Donny at the 2022 Read more… 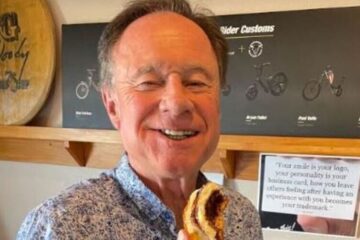 Bun Patrol:
In Search of the Sturgis Sticky Bun