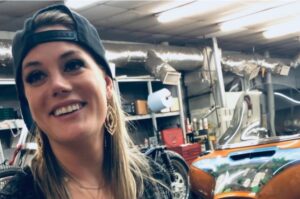 Fairless. A legendary name in motorcycles, to say the least.

Lena Fairless is the daughter of Rick Fairless, who is best known for his psychedelic tie-dyed custom choppers from his shop in Dallas, Strokers Dallas. But Lena is making a name for herself in the motorcycle world as well, co-hosting a live show with her father and even building bikes herself.

She can be found working daily at Strokers Dallas – yes, in Dallas, by God, Texas! 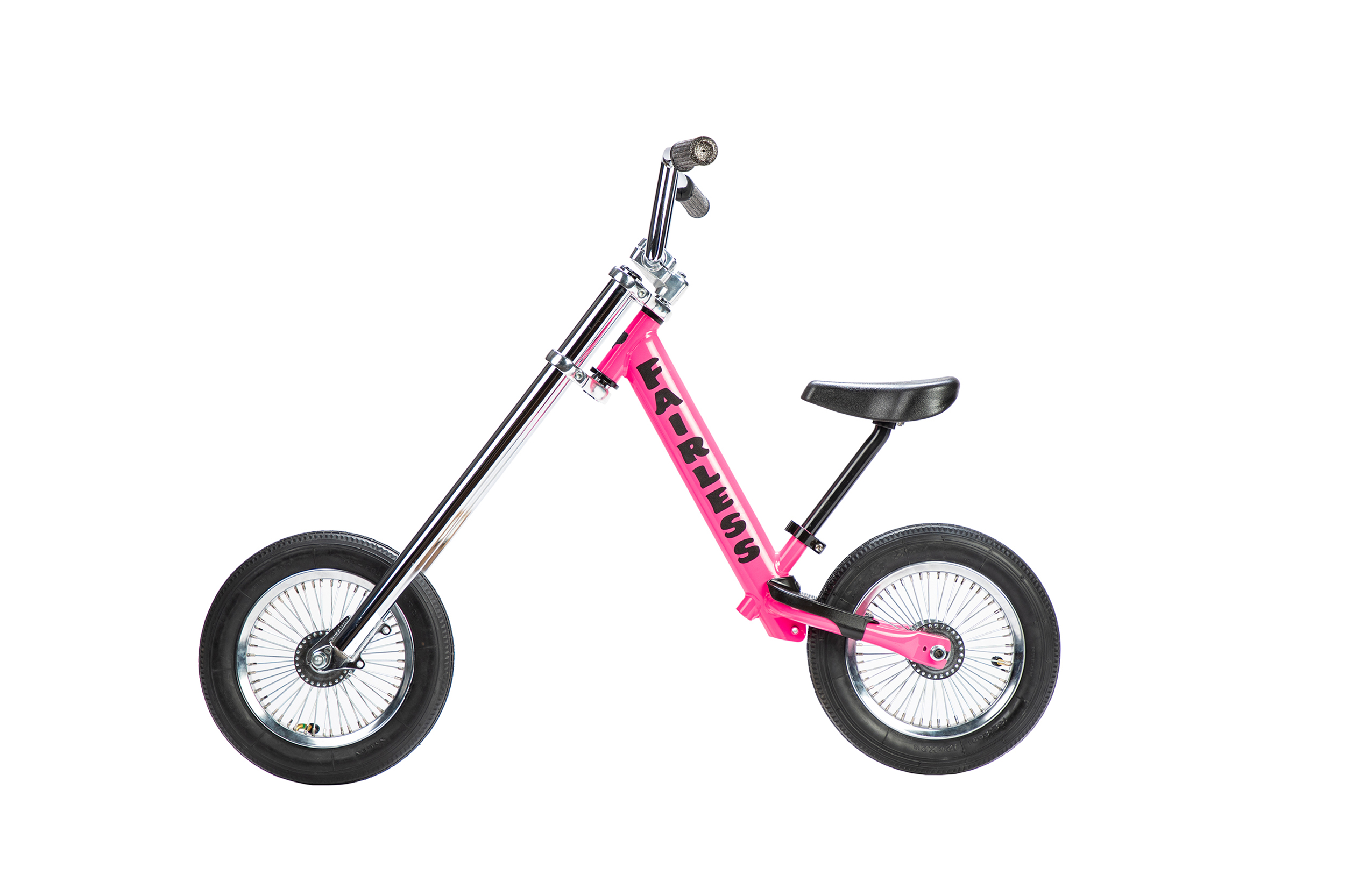 Lena was excited to try her hand at building a custom Strider and jumped at the chance to be a part of this charity build. Having grown up around choppers she’s no stranger to the open road. She got her first bike, a Yamaha PW50, on her second birthday, and thirty years later, she still has her passion for two wheels. 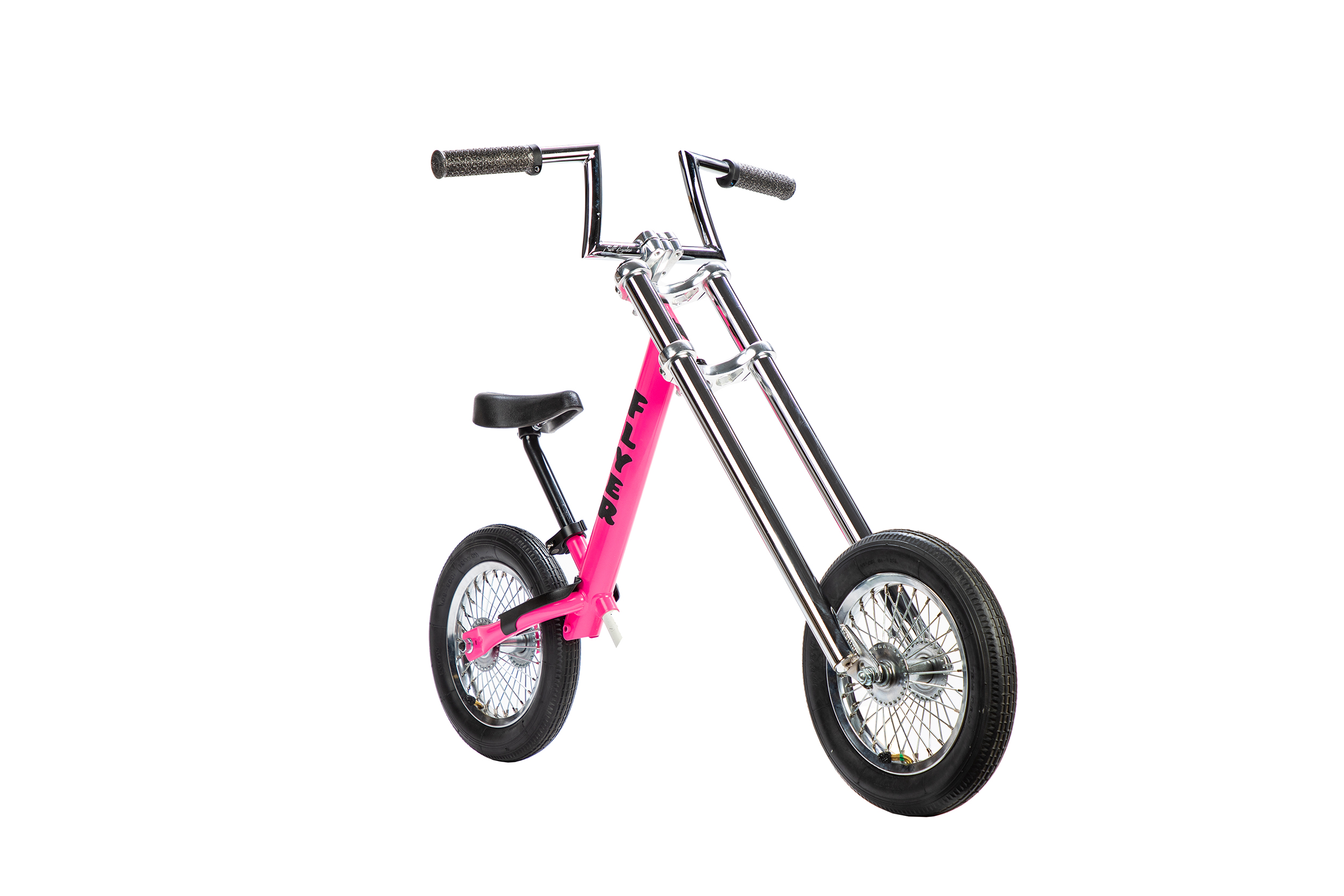 She’s sharing it with her own kids, too. Lena’s two young children, Rockey and Pearl, both learned to ride on Striders. Pearl has graduated to riding the PW50, and Rockey has moved up to a TTR. So needless to say, Lena is dedicated to the cause that benefits from these tiny builds. See, proceeds from the bikes go to All Kids Bike, a program of the Strider Education Foundation whose goal is teaching every kid to ride a bike in kindergarten PE class. Lena knows that getting kids on two wheels early is important – and believes it will entice them to keep growing and moving up to a dirt bike or motorcycle. 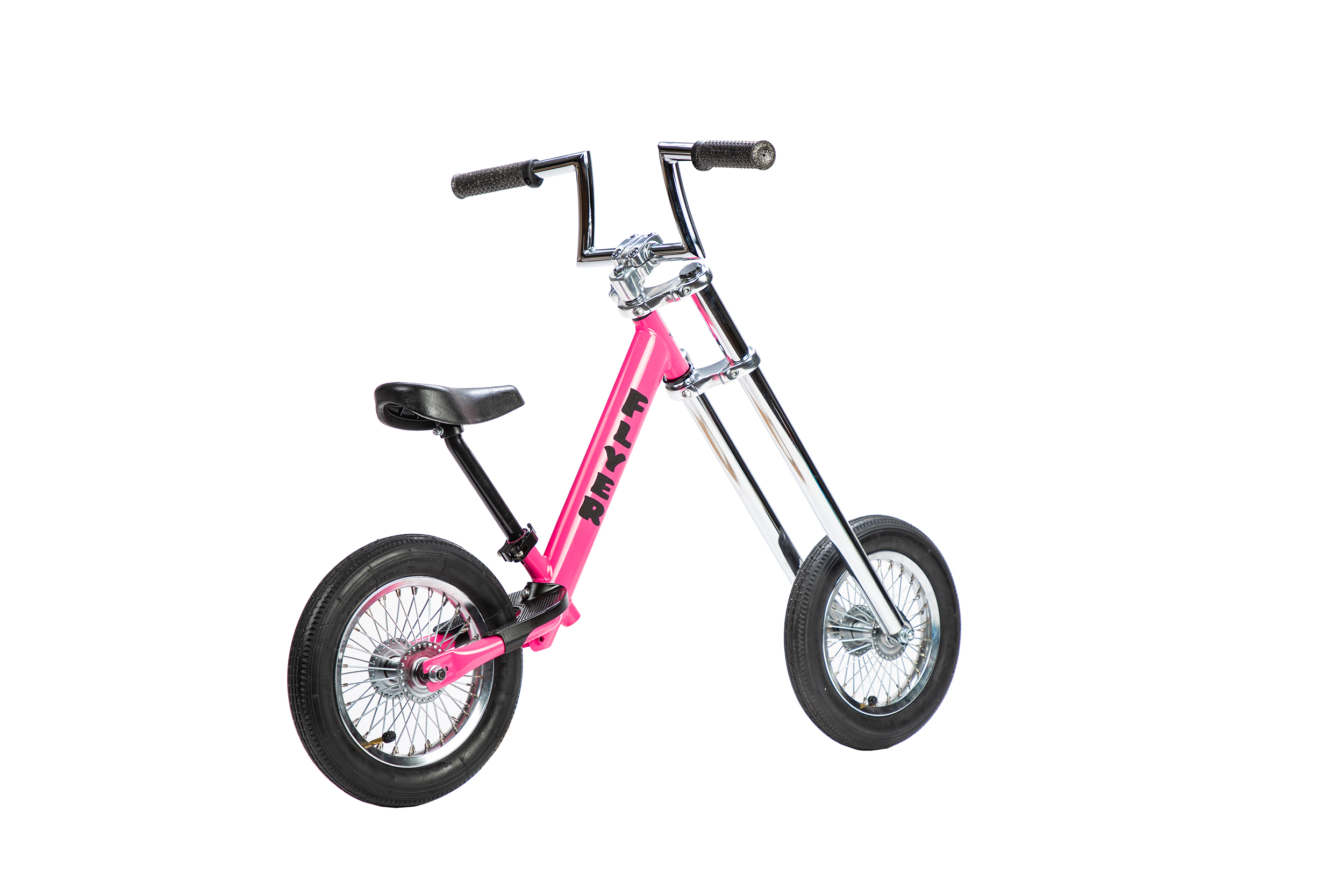 In developing the design for her tiny Strider custom, a bike she dubbed the Fairless Flyer, she reached back to her childhood. As a kid, Lena’s favorite bike was the Pat Kennedy “Easy Rider” chopper and she wanted her Strider to have a similar stance. Lena stuck with bright pink, adding a killer custom front end, with tiny triple trees. She also added chrome handlebars from Clyde James Cycle in Haltom City, Texas, along with spoke wheels to bring home the chopper look. They cut, chopped and fabricated the rest of the bike in house at Strokers Dallas. 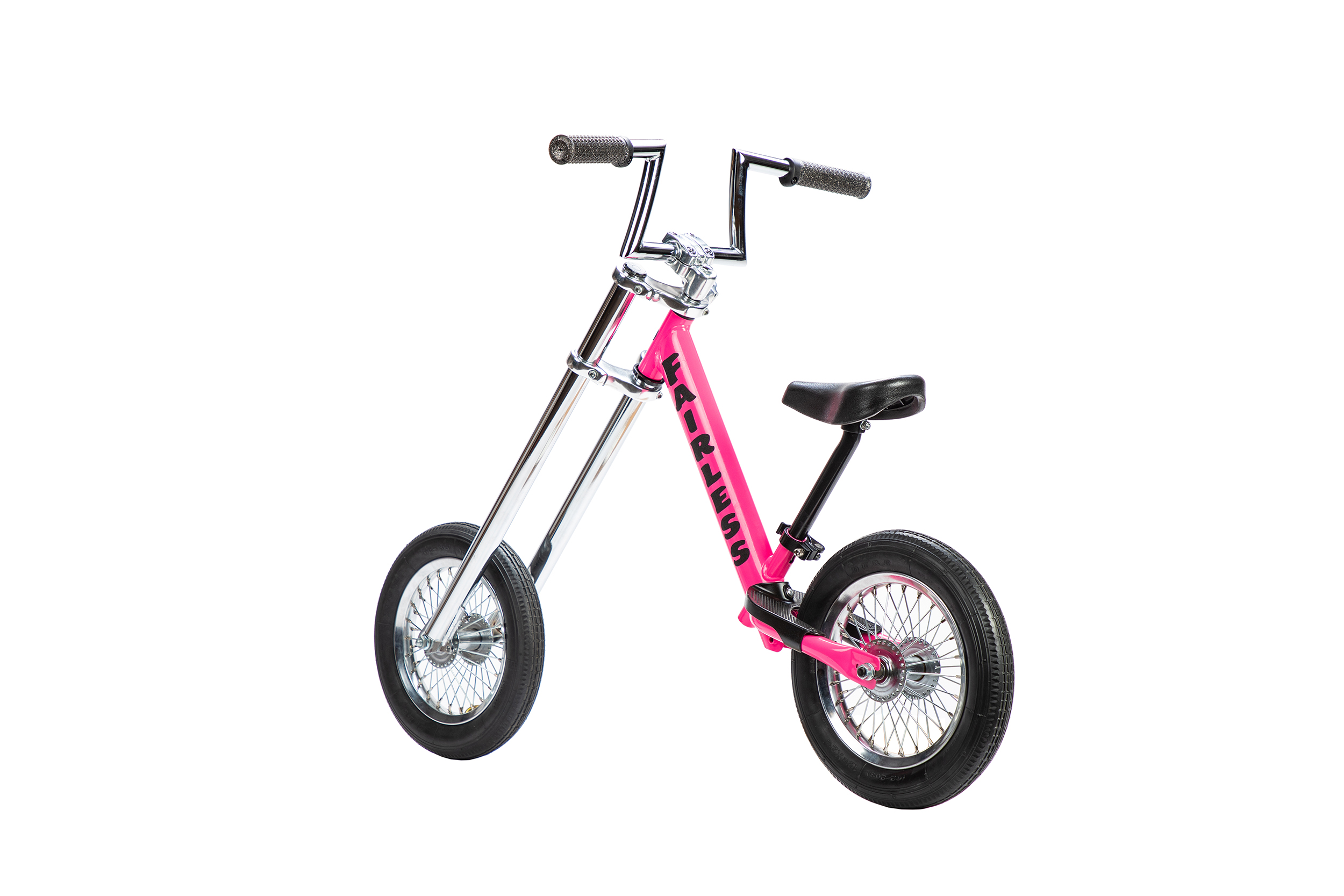 Lena’s favorite part is the seat, though at first glance you’d wonder why. But in the sunlight a black-on-black shape is revealed – and it’s the state of Texas! It’s subtle, but glittery – just right, in Lena’s opinion.

All in all, Lena’s build screams at you with that classic Easy Rider look and is sure to entice a rambunctious little one to want to go ride. That’s the idea, right? 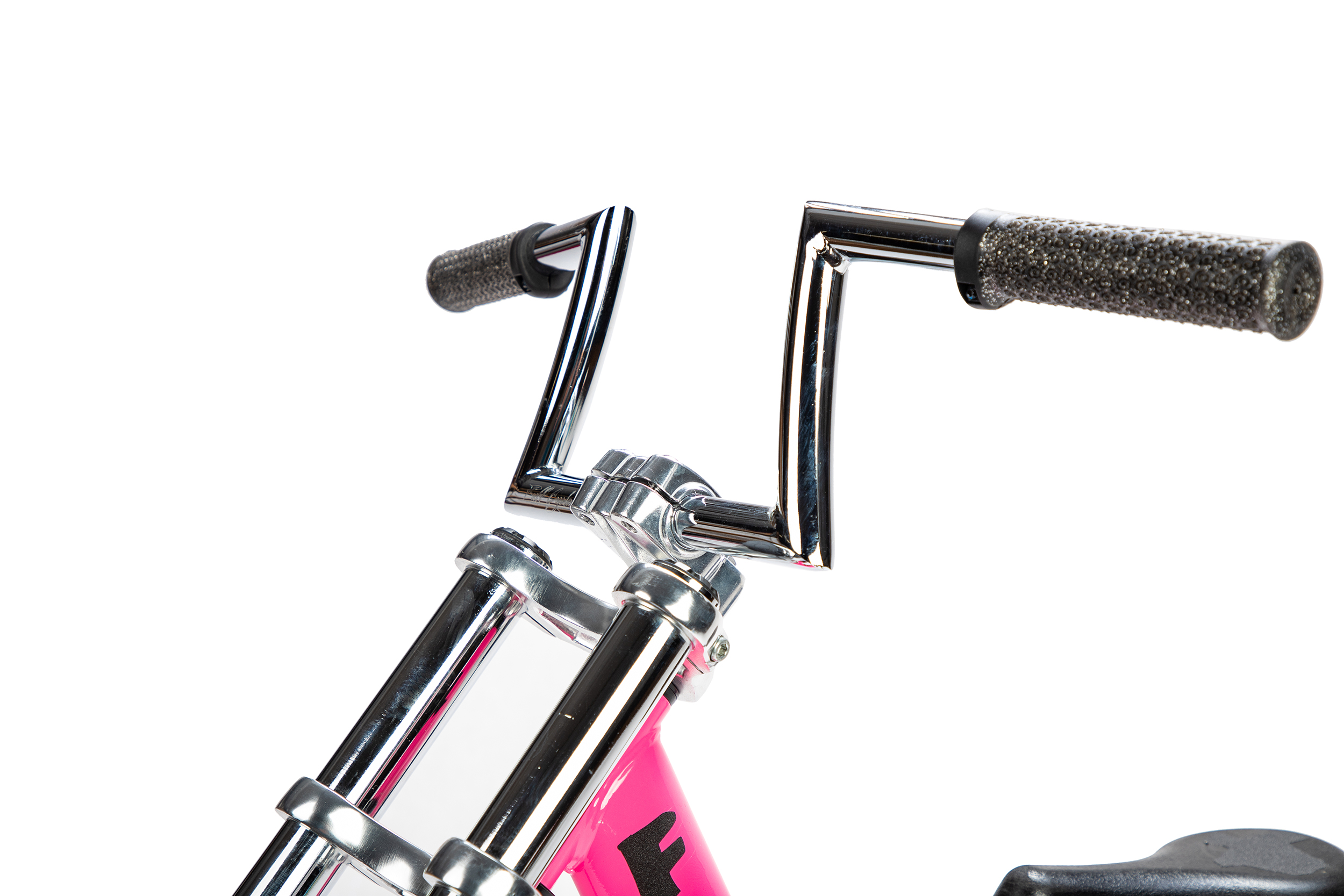 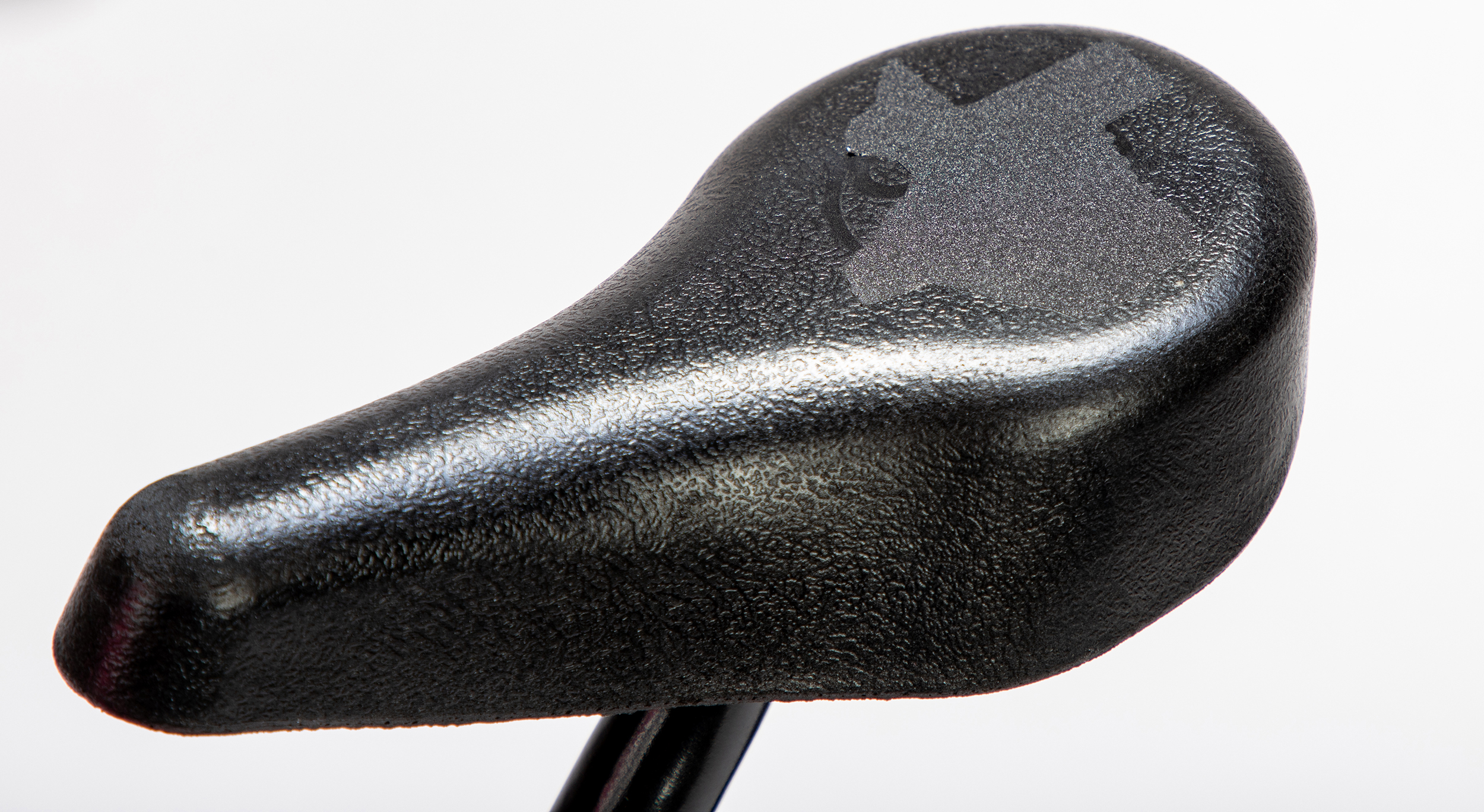 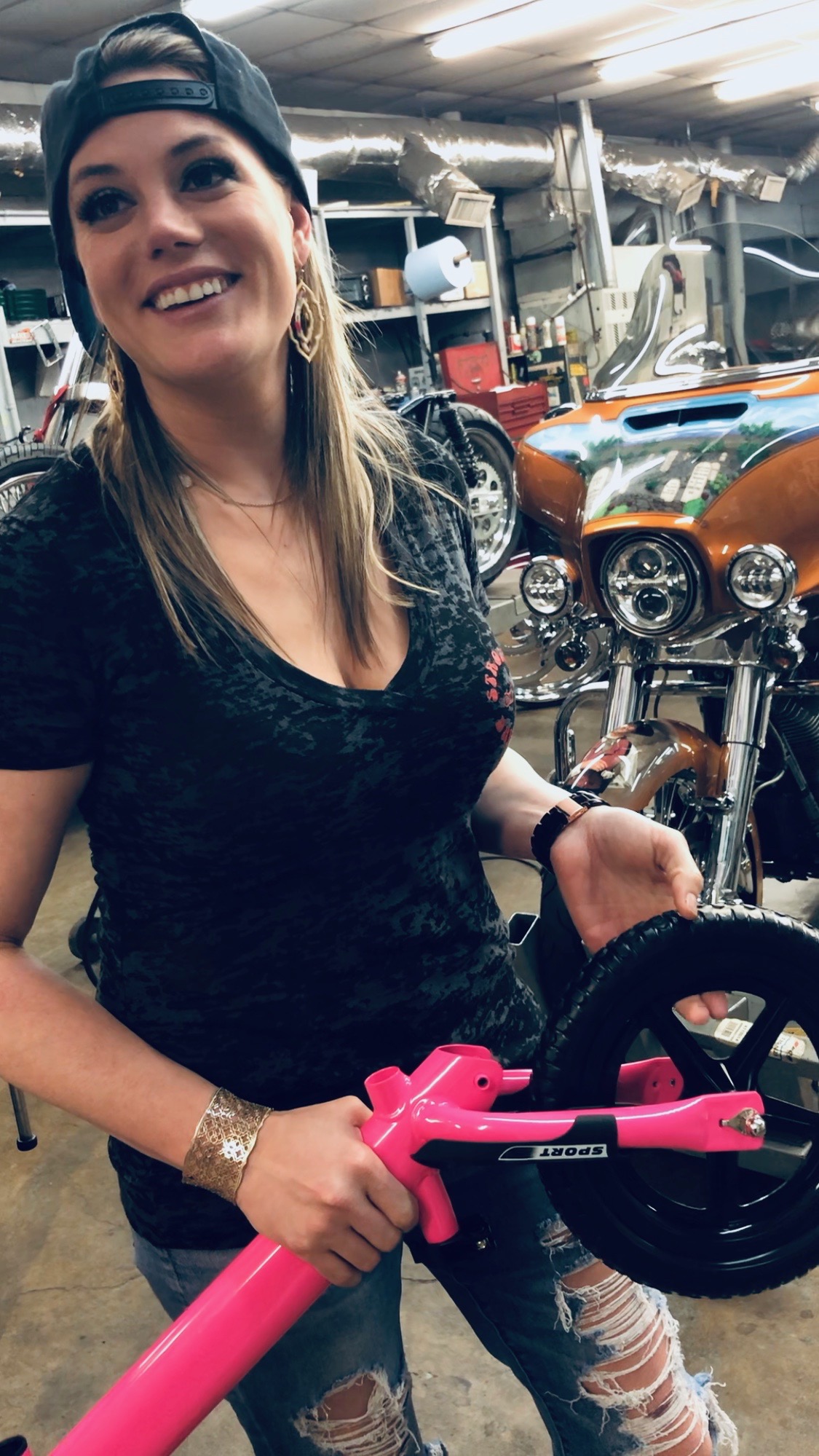 Lena Fairless AKA ‘Bigun’ can be found daily at Strokers Dallas. She has been working alongside her father Rick Fairless her entire life since the early days when it was Easyriders of Dallas. She got her first bike (a Yamaha PW50) on her 2nd Birthday, and 30 years later still hasn’t lost her passion for two wheels!

Lena’s favorite place to ride is the Black Hills in South Dakota, and her favorite people to ride them with are her Dad and her best friend Jody Perewitz. She has attended the Sturgis Rally for the last 7 years, and is so excited to participate in the 80th Annual Sturgis Rally by customizing a Strider for the Flying Piston Benefit!

Lena has 2 children, Rockey and Pearl, and they both learned to ride on Striders. Pearl is now learning to ride the PW50, and Rockey has graduated to a TTR! Getting kids on 2 wheels, and creating a culture of riding for the next generation is a cause that Lena will always be on board with. 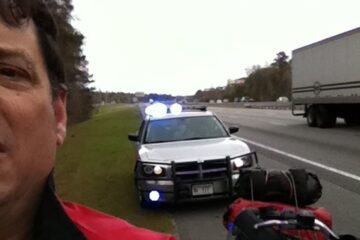 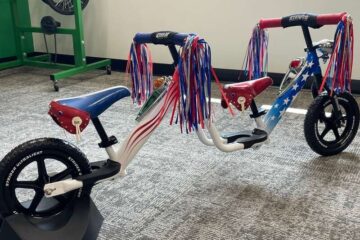